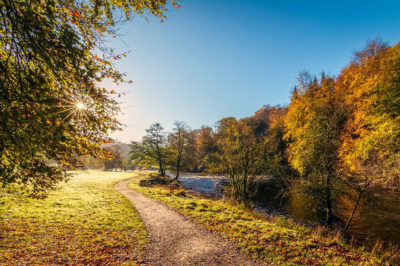 A while back, some years ago, I bought a piece of land up along Pine Creek. They call it a creek but it’s certainly more like a river. I always had a love for water so to purchase a piece of land along a river was truly a blessing. However, the land was so overgrown that it was impossible to get to the water.

One day my determination took over. I could hear the water, I knew it was there, but I couldn’t truly experience it. Me and a friend got two machetes and were determined to make a path to reach the river. The land was overgrown with brush, thick grass and large sycamore trees. As we slowly forged ahead, we would constantly be forced to take detours to avoid the fallen trees, huge rocks, and even a pond. It soon became very tempting to give up the quest.

We started in the morning and by now it was afternoon. We crossed a small stream and we considered to make that the reward for the work that we had done. The small stream was nice, but it wasn’t the river. We pressed on using the sound of the rushing water as our guide. Finally, the wall of green began to thin out and we finally had our prize in sight. As we broke through the last bit of brush to reach the bank of the river, all the hard work finally seemed worthwhile. It was beautiful. It was a hot day so we both jumped off the bank right into the river. It was a long hard path, but it was worth it, the river had so much to offer. We could swim, canoe, and fish. As we were heading back to the road, I was thinking how cool it would be to have an aerial picture to see how many little turns we had to make to avoid all the obstacles in our path. But it didn’t matter however because we made it.

As we were relaxing that evening, I made the statement that I never wanted to allow the brush to overtake the path that led to the River. The next day we walked the path to make it wider and more visible. I knew I wouldn’t be back up to the mountains for another month, so I told different people that lived up there about the path, and I invited them to make good use of it. These people never had access to the beauty and peacefulness of that spot, even though they lived up there all their lives. Now they could follow the path we created. Interestingly enough, the next time I got up to the mountains I was thrilled to see that the path was easier than ever to find because many other people were now traveling on what my friend and I made possible.

You know, Jesus blazed a trail for us to travel, to walk out a lifestyle that was never available before. Jesus cleared the path, marked the trail, and now it’s up to us whether we want to maintain that trail — not only for our own use, but for the lost to use to find their way to Jesus.

When land is left unoccupied, weeds, thistles and saplings quickly overtake that space and people will stop their quest or encamp along the way and settle for less than what God has to offer.   They will never press on to the river of flowing water. Others will backslide and never enter the path again.

The enemy is ever-present to thwart us from moving forward to reach an abundant life. He establishes barriers that will kill, steal, and destroy. Through the devil’s deception, people become complacent. They will justify their thoughts and actions on worldly standards.

Be like Jesus – He didn’t settle for compromise. At each encampment along the way, you will gain more of the revelation of God and His love. Continue to press on until you reach the riverbank. Keep your path open and invite others to reap the fruits of the river of abundant living. Help guide them along the way.

Keep the path clear and continually blaze new paths, towards the river of flowing water, the river of life. I choose to take new territory for the kingdom of God!   What about you?