PRAY IS EVERYTHING – I LIVE! 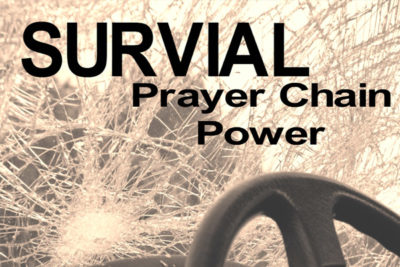 Within hours of my accident, I was on prayer lists & prayer chains all across the country…from New England to Florida & from Maryland to Oklahoma! And no one can ever convince me otherwise that those prayers made a huge difference in my recovery. I was supposed to be in the critical care unit for weeks…I was moved to acute care in 10 days! I wasn’t supposed to be walking until September…took my first steps in July! The list goes on, but I want to talk about the amazing prayer story that happened the week PRIOR to my accident.

My son, Brandon, had been feeling this sense that something bad was going to happen to someone in his family & they were going to suffer greatly. He had no idea who or what, but something bad was coming. He reached out to some of his praying friends, shared this feeling & just asked them to be in prayer with him. I don’t know who they are, but they do, and I thank them from the bottom of my heart!!

By Saturday this feeling was so overwhelming that he shut himself in his room & spent the day in prayer & reading from John chapter 16. That night as he prepared for bed, he prayed one last time. This time a prayer of surrender. He told God that no matter what was going to happen, or who was going to suffer, it was in His hands & we as a family would need Him to get us through it. Hours later the police were knocking on his door.

As the days went on and more details of the accident came forward, we realized…are you ready for this?????….the moment that he prayed that prayer of surrender was the same moment I was hitting the tree! AMAZING!! The miracles started immediately! Good Samaritans stopped & called 911. I wondered how long I was there before someone saw me & called for help? Dr said they had to have stopped right away otherwise I would have bled to death, which I almost did…but I didn’t!!!

The closest EMT’s were already out on a call so dispatch called the next closest unit which just happened to be…the mobile intensive care unit! I mean, only God does that! Since I couldn’t be life flighted because of the weather, that crew got me to the trauma unit in 35 minutes, in rainy weather, a trip that normally would take at least an hour! When the doctors talked to my family, they were amazed that I had no brain injury, no spinal cord injury or damage to my internal organs, other than my lungs & my chest which were in pretty bad shape. Apparently, I bounced back & forth hitting the air bag first, then hit the back of my head on the “B pillar” of the car, then forward again, this time bending the steering wheel with my chest!

Thank God I had my seatbelt on! My injuries were catastrophic & I have limited use of my right hand & my right knee doesn’t bend. But I AM ALIVE! I am walking unassisted! I live to share the goodness of God & His mercies to me! I live to share the story of Brandon’s obedience to prayer and have had people get chills, or shout hallelujah when I share this story! And one nurse at rehab, who I had never seen before, got tears in her eyes & told me she had lost her faith, but that day, her heart was stirred! I never saw her again. I pray often that her heart has since been turned towards God!

So, to everyone who prayed for me thank you!! Because of your faithfulness I am still here! To God be the glory, God bless you and NEVER stop believing in the power of prayer!!